❝ Hell yeah, man! Barbarians are at the gate, and ready to bust some Roman heads!❞
―Wrench

Wrench is the deuteragonist of Watch Dogs 2. A hacker affiliated with DedSec, he works alongside Marcus, Sitara, and Josh. He is the group's engineer and fixer.

Even though Wrench is loud-mouthed and animated, it is speculated that he had a troubled childhood with debilitating shyness, leading him to build an electronic mask that would serve as his means of expressing his emotions.

This section is under construction and needs to be expanded. You can help by expanding it.

Wrench first appears in the introductory mission, watching Marcus work his way through the CTOS server farm with the other DedSec members and asking questions about him. After Marcus deletes his profile and escapes the facility, Wrench shoves a bag over his head and forces him into a van. Later, on a beach, Marcus is introduced to the team and they celebrate his becoming a DedSec member by drinking beer and partying. When Marcus arrives at the hackerspace the next morning, Wrench introduces him to the Research app and the 3D Printer.

Sometime after that, Wrench called Marcus and told him that the CyberDriver trailer had been released, and asked him to come back to the hackerspace to watch it. While he and Marcus appreciated the trailer for fun, Sitara and (especially) Josh found it mundane and insulting of hacker culture. While DedSec launches Operation: Hack and Run, Marcus steals CHIP and brings it to Wrench's garage hackerspace, where the team fixes up the car for a publicity stunt. Wrench is seen preparing the car while Marcus remotely pilots the vehicle through the streets of San Francisco.

Wrench's mask and mechanical goggles appear to "blink" emotes and various eye expressions, and the mask features a voice modulator that gives his voice a more robotic tone. The goggles can also project multiple pixelated symbols and appear to be made of many small, square-shaped bulbs. Wrench also has a series of tattoos on his arms influenced by Cyberculture. His vest shows a sewed patch inspired by the "y u no" meme on the right side, and an "anarchy" symbol tattooed on his neck. He has additional tattoos on his stomach and back, which are visible when he attends Swelter Skelter in costume during Looking Glass.

While attending the Swelter Skelter fest, he wears his trademark mask, a hood that features a large mohawk, a black motorcycle vest, a black man-thong with a spiked front, spiked kneepads, and black shoes.

Wrench's face is revealed when he is deprived of his mask during W4TCHED. He has a large, prominent port-wine stain birthmark around his left eye.[1] He has blue eyes and light brown hair. Interestingly, during the mission Motherload, he wears spiked shoulder-pads and spiked knee pads despite not wearing them in any cutscenes before the mission. It's possible that he put them on just for that mission, or developers forgot to remove them from the controllable model.

Wrench was also confirmed by Ubisoft that he will be appearing alongside Aiden Pearce in the Watch Dogs: Legion DLC Bloodlines.

Wrench has a wild and humorous personality, as seen in a cutscene where he is trying to get a chip from a toaster; instead of properly taking it apart he smashes it with a sledgehammer instead. However, he appears to also be one of the more aggressive members of DedSec, as seen in the World Premiere trailer in which one of his dialogue to Marcus says that they are at war with everyone, including puppies. His aggression extends to his strategic thinking - during False Profits, he suggests making up a lie about the New Dawn church to discredit them before Sitara and Marcus counter that the risks would outweigh the rewards. He has an affinity for spikes or a punk aesthetic, as seen by his choice in clothing. He has gone to some parties in his life sipping beer under his mask. Some people say they actually have seen him without the mask but he prefers to deny it.

According to an in-game audio log, the FBI developed a psychological profile of him and determined him to have a troubled, possibly traumatic childhood. As such, he is socially awkward around women, has trouble conveying his emotions, and wears his trademark mask as a "billboard" to show how he feels (one FBI agent even likened this to Roy Orbison's use of sunglasses).

In another in-game audio log found in the original hackerspace, Horatio mentions that Wrench wears his mask to dodge CTOS's facial recognition, but probably has a deeper reason such as hiding from a dangerous past.

He is also very crude, as in the mission Haum Sweet Haum, he tells Marcus to get the Haum 2.0 Zero-Day before "some do-gooder white hat tells Haum how to... cockblock [them]" and at the very end of his portion of the Motherload mission, upon destroying Blume's backup servers he tells Marcus "I came, I saw, I blew shit up, I came again."

While he is obviously friends with the entirety of the DedSec crew, Wrench grew particularly close to Marcus Holloway due to their mutual love of Jimmy Siska movies, sci-fi, action films, and their different but compatible senses of humor. They grew especially close during the events of W4TCHED, in which Marcus developed newfound intimacy with Wrench after returning his mask (a very personal item of Wrench's; one that an FBI agent described as "a totem") to him when both the FBI and Dusan Nemec stole it from him for the sole purpose of psychologically intimidating Wrench.

Another prominent example of their friendship is in the DLC mission Moscow Gambit where, after learning the Bratva kidnapped Marcus and tried to kill him with a car crusher, Wrench angrily punched a hole in a nearby wall. Once Marcus returned to the Hackerspace, Wrench hugs him tightly, clearly relieved that Marcus is alive.

Being a member of DedSec, Wrench respected Sitara as both a friend and a capable hacker who brought her talents for art, speech, and programming to the forefront of DedSec's public image and operational capacity. They do seem to have a fairly playful side to their relationship, as Sitara once teased Wrench when a Prime_Eight doxxing list suggested Wrench's real name to be Reginald.

Wrench also respected Josh as a talented hacker, however, their relationship was not without their disagreements and misunderstandings. For example, during a cutscene in the mission Haum Sweet Haum, Josh and Wrench could briefly be seen arguing before Marcus broke them up. Generally, though, Wrench got along with Josh.

Wrench's interactions with Horatio were minimal, to say the least. This is not to say Wrench didn't think highly of Horatio, however; at the end of the mission Eye For An Eye, Wrench mourned his death, noting that the Tezcas could have come after any one of the DedSec crew members.

Wrench's relationship with T-Bone was rocky from the start, with their initial greetings being sly but passive-aggressive compliments of each other's' hat and mask. This became even more tumultuous when T-Bone proposed using Wrench Jr. as a plant to detonate an EMP inside of a Tidis facility, a suggestion that Wrench vehemently despised; so much so that when Marcus agreed to it, he almost compromised his friendship with Marcus. By the end of the game's story, however, he eventually learned to get along well with T-Bone.

During the mission W4TCHED, three Audio Logs left by FBI members about Wrench can be heard.

"The subject is remarkable in that he wears a mask at all times. The mask prevents our facial recognition software from determining his identity. We have also run several vocal passes, the results are indeterminate as to region and upbringing. His work is that of a high-level, albeit self-taught, hacker whose calling card often involves crude jokes left encoded into his target's core program."

"Previous to his DedSec involvement, the subject known as Wrench mostly pursued cyber-attacks of dubious humanistic value. Changing website text to verbiage, often using bathroom humor. This sort of adolescent acting-out has transformed as he has become more deeply involved in DedSec. He now operates within a team, generally pursuing either corporate or political targets. The subject is considered dangerous."

"As for DedSec member Wrench. Surveillance indicates that he is awkward around the opposite sex and uses his mask as a deflecting device. A psych analysis postulates a disrupted childhood along with possible debilitating shyness. Subject copes with this using the mask which he has programmed to reflect his emotions as a sort of electronic billboard. Within the world in which the subject operates, this solution is considered ingenious."

Additionally, Horatio Carlin recorded an audio log detailing Wrench's involvement in DedSec, which can be found in the San Francisco hackerspace.

"The Wrench...man...what to say about this guy? Some freaky shit going on right there. I'd like to say he's actually a sensitive, charming guy beneath the harsh exterior, but I'm pretty sure he's a "fucked up motherfucker" all the way through. I don't even know who first recruited him, he just started showing up at local hackerspaces and building his "tools of destruction". At first, I thought he was trying too hard... like he was an FBI plant or something... but no agent's going to pull the kind of suicidal stunts this guy does. I think the truth is... Wrench doesn't care if he dies, but he's not going quietly. Even so... I'm glad we've got the Wrench on our side. One of the group's biggest problems is a lack of GSD...Gettin' Shit Done. The Wrench is pure GSD and he brings his own sledgehammer. He's not some dumb thug, either... I've seen some of his code--he's legit. Probably why he's interested in DedSec and not some street gang. You know what, I take that back. He might actually belong to a street gang. Who knows. One thing I do know about Wrench... the man hates Blume. I mean HATES them. I can't get the "why" from him. It's obvious he wears the mask to avoid the facial recognition, but what's he hiding FROM? He's not saying." 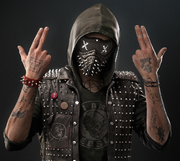 Wrench without his mask.

Marcus and Wrench meeting up.

Another view of Wrench.

Wrench from Watch Dogs: Legion
Add a photo to this gallery

Retrieved from "https://watchdogs.fandom.com/wiki/Wrench_(character)?oldid=79129"
Community content is available under CC-BY-SA unless otherwise noted.