Watch Dogs Wiki
Register
Don't have an account?
Sign In
Advertisement
in: Article stubs, Articles in Need of Images, Businesses in Watch Dogs,
and 2 more

View source
watch 04:03
Wiki Targeted (Games)
Do you like this video?
Play Sound

The broadcasting network hosts news, weather, and stock reports for Chicago, San Francisco and presumably, other major American cities. WKZ TV updates the player on the city's conflicts and crimes as they progress through the game - like when Aiden or Marcus commit a significant crime or action. WKZ TV owns a fleet of News Vans for broadcasting and News Trucks (Media Broadcast Trucks in Watch Dogs 2) for advertising.

Apparently, WKZ is not exclusively a news network, as it advertises non-news programming. However, the only program advertised is called Cop Show, which airs on Wendesdays at 8, and is a parody of Cops. This advert only appears in Watch Dogs.

WKZ TV operates a fleet of vehicles as seen in Watch Dogs and Watch Dogs 2. 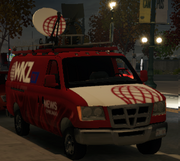