The Sumitzu Auto Valiance CE is a vehicle in Watch Dogs 2.

The design of the car is invariably reminiscent of the third generation Toyota Prius, with headlights similar to those of a Chevrolet Volt, the tailights that are similar to the aforementioned Toyota Prius, but with a wide third brake light.

Because of its general size and purpose, the Valiance CE is not very fast but performs decently, owing to its front wheel drive system, the single-speed gearbox and large bodywork. Its resistance to collisions is acceptable, but not for higher Heat Levels.

Despite it has an all-electric sound, the Valiance CE has exhausts pipes on it, which could indicate that the vehicle is hybrid. Its engine sound is the same as many electric vehicles, such the Asteria Prime and the Merengue. 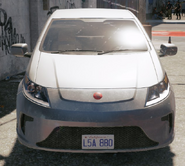 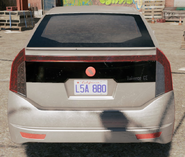 A green/white Valiance CE taxi.
Add a photo to this gallery

Retrieved from "https://watchdogs.fandom.com/wiki/Valiance_CE?oldid=66102"
Community content is available under CC-BY-SA unless otherwise noted.