Umeni-Zulu is a private military company and faction mentioned in Watch Dogs, but plays a major role in Watch Dogs 2.

Umeni-Zulu began by providing the U.S. government with cryptographic technology products before expanding their service into collecting intelligence both domestically and internationally. They contract for the CIA and have been involved in paramilitary actions across the world as well as utilizing cyber-security in a variety of clandestine actions. They are a highly private group that keeps itself hidden well from public scrutiny, but they have been accused of being a MOSSAD front and even a CIA front. This is leading to speculation that some private military corporations (PMCs) may be intelligence-gathering fronts for domestic and foreign interests.

Umeni is a corporation that made money while letting its engineers carry the legal liability over an incident, which lead to them being jailed, some of who are now members of DedSec. This is mentioned at the beginning of the exclusive mission "CTRL" (part of the White Hat Pack DLC). They have their own building, as seen in Watch Dogs: Bad Blood. Other than this, not much else is known about them.

Umeni has a much larger role in Watch Dogs 2. It is revealed that they are a private security company and will serve any corporation that needs their aid. This is seen in Watch Dogs 2, where if certain factions (like security guards and robots, New Dawn, and more) are in need of assistance, they will call for backup, and Umeni will show up at the area almost instantly in their customized security Sonarus LX patrol vehicles.

Because it is a legal faction, they will never engage in gunfight with the police (aside from the rare event that after forging an arrest warrant for a Umeni Security officer, they will sometimes resist and open fire on SFPD or OPD officers), instead they will assist them to catch Marcus or any other illegal faction members. However, the police will still arrest or open fire at Umeni only for serious violations (such as shooting at Marcus for unspecified reasons). Umeni members can also be framed.

Umeni bodyguard in Power to the Sheeple. 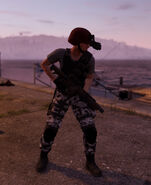 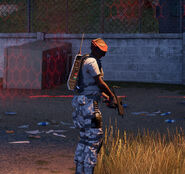 Umeni-Zulu Logo
Add a photo to this gallery

Retrieved from "https://watchdogs.fandom.com/wiki/Umeni_Corporation?oldid=67945"
Community content is available under CC-BY-SA unless otherwise noted.