The Merlaut Hotel is a hotel that appears in Watch Dogs.

The Merlaut is located in the Mad Mile district of Chicago. The building features a fairly simple exterior design; being mostly linear and gray in color. The building has three floors and is intended as a short-medium stay venue. Over the course of development, it was eventually renamed the Merlaut Hotel in the final version. Dermot "Lucky" Quinn is the owner of the hotel. It is also the setting for the game's prologue and sets the entire story's events in motion.

Aiden shows up at the hotel in the beginning cutscene to perform a heist with his partner Damien Brenks (now disbanded), before getting caught. In the last mission of Act IV, Aiden infiltrates the hotel to kill Lucky Quinn which he succeeds by hacking into his pacemaker.

Curiously, the Merlaut changed locations from earlier builds to the final one. It was previously located on the pair of roundabouts near the WKZ TV building, but was moved to its present location and replaced by a similar building housing the Gorman Heights apartments.

A view of the original hotel's entrance 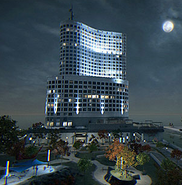 View of the building.

The Merlaut, as seen in the prologue.
Community content is available under CC-BY-SA unless otherwise noted.
Advertisement