The Smartphone is a primary tool used by the protagonists in Watch Dogs and Watch Dogs 2.

The device itself will only be visible in Aiden's hand. Its design is similar to the iPhone 4/4S, complete with a black shell and silver rim. The device features a shiny front face, most of which is occupied by the screen. The only visible physical front-facing button is presumably the "Home" button.

In Watch Dogs 2, Marcus Holloway's phone is depicted as a sleek, modern smartphone with a wide screen, probably modeled after an iPhone 5/5S/SE, considerably more modern than the phone in the first game. The home button on the bottom has the Blume Corporation logo, which reflects that Blume produced the phone. He initially had a phone of his own, but after Dusan Nemec secretly hacked his phone, Marcus (albeit drunk at the time) threw it into the ocean, and was subsequently left with a new phone by Sitara in the morning.

In Watch Dogs: Legion, the smartphones have been given a more futuristic redesign, making them resemble transparent slabs.

The smartphone's user interface is styled after Android's "Material Design style", with two pages of apps that can be switched between by pressing controller buttons. Each page has the capacity of 8 apps, with the dock holding 4 apps. The UI now functions similarly in most aspects to a real smartphone and now shows the in-game time, the player's follower level, the current weather, and tomorrow's weather. The following apps are available:

An example of the smartphone interface in Watch Dogs. 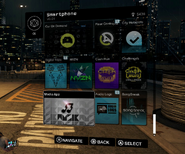 An example of the smartphone interface

Smartphone interface in Watch Dogs 2.
Add a photo to this gallery

Retrieved from "https://watchdogs.fandom.com/wiki/Smartphone?oldid=66803"
Community content is available under CC-BY-SA unless otherwise noted.