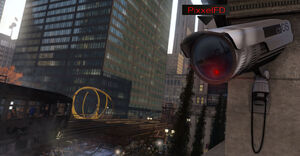 For the app that Marcus can take pictures with in Watch Dogs 2, see Camera App.

Security Cameras appear in a wide range of locations across Watch Dogs' rendition of Chicago.

The security cameras are all wall mounted and are connected to the CTOS by default. The cameras are able to rotate about, to give a 100° field of vision, though some are specifically mounted to allow 360° horizontal field of vision (vertical is unchanged). Each unit includes a visor and also comes complete with CTOS markings.

These cameras can be hacked by Aiden Pearce if remote access is enabled. All Profiler actions and abilities will then be available, but will use the camera's view. If multiple security cameras are in range, Aiden can jump from one camera to another. Aiden's location will then be highlighted by a black diamond with four outward-pointing arrows, at right angles to each other.

Cameras can also be controlled by other players in a single gaming session. When the system is intruded, the cameras will have the name of the intruder highlighted above the camera itself, in red. The name of the user will also be displayed in the section of the highlight informing the player of the camera's controller.

When using a camera, the Profiler is engaged by default, and cannot be turned off.

In certain story missions and Gang Hideouts, some enemies, such as the guards in Palin Correctional Center, have a hidden camera on their person that is connected to the ctOS and can be accessed so long as the enemy is still alive. These cameras, mounted on the front of the guards torso, have less articulation than wall-mounted cameras but are mobile, and so can be used to track and follow the guard's patrol and observe things in the wall-mounted cameras blind spots.

During the events of Bad Blood, Tobias Frewer set up several armed variants of these cameras outside his shop and inside Raymond "T-Bone" Kenney's hideout, The Silo. These cameras are armed with machine guns and grenade launchers and can be operated by normal means, but they can be controlled to fire their guns as well. The guns do heat up when being fired, so T-Bone will have to control his firing rate to prevent overheating. However, these guns have unlimited ammo, so he may fire them as much as he wants as long as the gun is not overheated.

A security camera pop-up under normal circumstances.
Add a photo to this gallery

Retrieved from "https://watchdogs.fandom.com/wiki/Security_Camera?oldid=62286"
Community content is available under CC-BY-SA unless otherwise noted.