Watch Dogs Wiki
Register
Don't have an account?
Sign In
Advertisement
in: Cities, Locations, Locations in Watch Dogs 2,
and 3 more

San Francisco is a major city in California, and the main setting of Watch Dogs 2.

The city and county of San Francisco is located in the Northern California region, on a peninsula. It is the center point of the San Francisco Bay Area, which includes Oakland, Marin County and Silicon Valley. Prominent neighborhoods include the Financial District, Pier 39, the Presidio, the Castro District, Chinatown, and Japantown. It is also known for its cable cars, the Golden Gate Bridge, Alcatraz Island, Coit Tower, and more, making it a popular tourist destination.

In Watch Dogs 2, San Francisco and the surrounding Bay Area appears as the main setting of the game. The player is free to explore the city and the surrounding area. Blume has a server farm and campus located outside of Mission Dolores Park as shown in the missions Hack Teh World and Motherload. The city is also !Nvites Headquarters location, located directly North of Mission Dolores Park.

San Francisco is a city of many wonderful landmarks, portrayed in the game as world locations, the equivalent to City Hotspots from the first game. These landmarks are prominent in-game and in real life.

San Francisco has many transportation methods, which include Cable Cars, trolleys, trams, buses, taxis, and Taxi Boats. However, it lacks rapid transit, something its real-life counterpart has in the form of Bay Area Rapid Transit, or BART.

San Francisco is serviced by three major bridges: the Golden Gate Bridge, the Bay Bridge and the Dumbarton Bridge, which all connect the city to the rest of the Bay Area. The Richmond San Rafael Bridge on the other hand is the only bridge that does not directly connect to San Francisco.

The San Francisco Police Department upholds the law of the San Francisco jurisdiction while Oakland Police Department are responsible of Oakland jurisdiction. Both agencies may initiate a joint pursuit if the suspect are driving between the jurisdictions. SFPD and OPD will immediately respond any 911 calls as well as investigate any suspicious source of gunfires or any other situations and SWAT will also respond to situations that are too dangerous for the normal officers to resolve.

In-game, San Francisco has one known sports team: the Beatniks, which are a parody of the Giants. The Ohlones, which are a parody of the Golden State Warriors, play in the Blume Arena in Oakland, which is based on the fact that the Warriors used to play in Oakland before moving to San Francisco in 2019. It is implied that a parody of the 49ers exists in the Watch Dogs universe, as revealed by one of the pedestrian text conversations which states that "we [San Francisco] technically don't have a football team anymore", referencing the 49ers' move to Levi's Stadium in Santa Clara (a part of the Silicon Valley which is south of San Francisco) which is not depicted in the game.

View from the Bay Bridge.

Another view, featuring the Salesforce Tower in the back.

The suburbs of San Francisco. Visible is the Coit Tower. 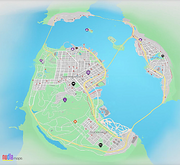 San Francisco in Nudle Maps. This is the in-game map.

View of the city skyline at night.

The skyline seen from Silicon Valley

Red bus lanes can be seen throught the city. Despite the fact that they are only for buses and coaches, other vehicles can be seen driving on them.

The skyline seen from the highway