The Bogen Menschen is a vehicle in Watch Dogs 2.

The vehicle is strongly based on the Volkswagen Beetle in its final years of production, fitted with various 1970s-style details such as square taillamps, upright headlamps and wing mirrors. Unlike the actual Beetle, it has a front-mounded engine, and it's rear is extended to accommodate a larger trunk. The rear windows are based on the ones found on later models, but are split in a manner similar to earlier models. The tailights are more reminiscent of those seen in the 1972 models.

The Menschen has full-chrome bumpers devoid of plastic, an uncommon trait of most cars of its period. It borrows front end cues from the Citroën 2CV, which is often compared to the Beetle in terms of popularity, appeal and longevity.

It has moderately quick acceleration. Despite having a relatively low top speed, it is light, maneuverable, and easy to toss around corners. 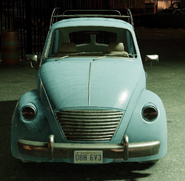 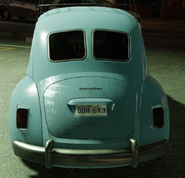