Marin County (known in-game as Marin or The Marin) is a county in the San Francisco Bay Area, north of San Francisco and northwest of Oakland. It appears in Watch Dogs 2.

Marin is the smallest of the four areas in Watch Dogs 2. (San Francisco, Oakland, Silicon Valley and Marin), located on a Peninsula, both in game and in real life. A prominent residential area of Marin county is Sausalito, which is also the smallest municipality in the game, slightly smaller than Pawnee in the first game. It also has a lot of forest area, and quite a few dirt roads in the north and west, with one connecting to the Point Bonita lighthouse. Marin also has a Yacht club called the Legacy Bay Yacht Club, which is the only place in the game where the player can buy Sailboats or maritime clothing from the nearby kiosk.

In-game, only the southern portion of the real Marin county is depicted. The main road traverses from the first intersection after passing though the tunnels near the Golden Gate, then alongside the coastline and connect to the San Refal Bridge on the highway, leading to the tri-point which in-turn leads to the Bay Bridge. 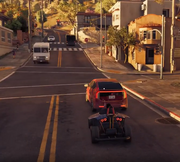 At the west entrance of Marin, eastbound traffic encounters two odd junctions side by side; first a stop sign followed by a traffic intersection (vice versa for traffic in the other direction)

At the east end of Marin, eastbound traffic enters the highway on the San Rafael Bridge leading to the interchange near the Bay Bridge, or leading to Oakland and Silicon Valley.

A Cave near Point Bonita

The Legacy Bay yacht club in Marin (Note, the CyruX does not spawn in front of it. It was the photographers car)

A cabin in rural Marin

A wiew of Marin pictured near the coast of Alcatraz