❝ It's a switch on your fears, fear of the other. They try to isolate you. It's called divide and conquer, and they tricked you into thinking it's what you asked for. You said with one voice: We will not be lied to. We will not be afraid. We will not be silent.❞
―Marcus Holloway

Marcus Holloway AKA Retr0 is the main protagonist of Watch Dogs 2. He joins DedSec in San Francisco to take down Blume and CTOS 2.0.

Marcus was born in Los Angeles, California in 1992 but moved to Oakland at a young age with his low-income family. Marcus was at one point placed into a community program where he would discover an affinity for computers. In 2012, rising crime rates would lead to the institution of the Home Domain Center, surveillance initiative, and in 2013, Marcus was falsely accused of being the primary suspect in a high tech robbery. With the only evidence being the HDC predictive software, he was merely sentenced to community service as punishment. However, because of the accusation made against him, Marcus was frequently discriminated against by the community. This disillusioned him to the system that put him in these circumstances, and under the alias "Retr0", he hacked local government officials and leak incriminating documents on HDC data gathering. Turning his attention to the rise of CTOS 2.0, Marcus started hanging around DedSec IRCs and searching for CTOS weaknesses on Nudle search.

Eventually, DedSec took notice of Marcus and offered him a test. A challenge of "the highest difficulty": erase his CTOS 2.0 profile. Marcus not only accomplished this, but he also installed a backdoor in CTOS 2.0 for easy access. Having passed their test, he was officially inducted into DedSec. Marcus helped DedSec gain followers to use in the fight against the CTOS 2.0, and the people who want to control it for their own gain.

Marcus went on a crusade against Blume and their puppets, so as to expose them for manipulating the people and violating many federal laws, thus ending with Mark Thruss defamed and Dusan Nemec, penniless and incarcerated for a very long time.

In the Watch Dogs: Legion DLC Bloodline, he is occasionally mentioned in exchanges between Wrench and Jackson Pearce. In Wrench's Safehouse, the player can also listen to voicemails left by Marcus for Wrench. Additionally, Marcus also makes voice appearances in the mission Devon v Devon: London Culling, where he gets hold of Wrench and they collaborate together to finish Jimmy Siska's upcoming movie.

Marcus typically wears a black sweater under a dark blue bomber jacket, with dark demin pants and high top, tan sneakers, as well as a small shoulder bag for his gear. He covers his face with a "DeDSec" hat, bandana, and shades, and has his facial hair in a soul patch and light mustache. His clothes are able to be customized by the player. 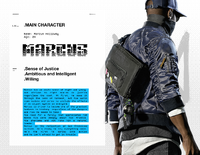 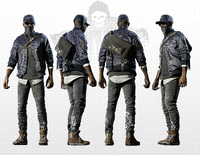 Marcus engaging in a shootout on a rooftop in San Francisco

Marcus beating up a thug with his Thunder Ball.