Not to be confused with the City of London, a borough in London.

London is the capital and largest city of the United Kingdom, and the main setting for Watch Dogs: Legion. During the events of Legion, the city has been overtaken by an authoritarian regime and has been dwarfed in chaos.

During the events of Legion, the city has been overtaken by a coalition of sinister organizations including the likes of Albion, a private military, Clan Kelley, a violent and destructive gang, Blume, the developers of all versions of CTOS and Zero-Day, a mysterious organization and the main antagonist of Watch Dogs: Legion. During this time, London has been overtaken by organized crime, while authoritarian police regimes deport people from their homes, and punish those who stand up for their freedoms.

The Camden borough is located in northwestern London, and is the home of both King's Cross Station and the Royal Courts of Justice, both major locations in the game's early story. Camden served as the introductory borough to teach the player about the borough liberation mechanics. However, since Update 4.5, the mission, Light A Spark, was removed from player view.

The City of Westminster borough is located in the western part of London. The DedSec Safehouse is located in this borough, along with the residence of the Queen, Buckingham Palace, and the world famous Big Ben, location of the Borough mission, Like Clockwork. The borough serves as the home of the UK Government and the UK Prime Minister (who, during the events of Legion, is not even in the country). The borough is by far the richest, with luxurious homes and cars dominant in this borough. It is also the HQ for Broca Tech and SIRS.

The Islington & Hackney borough is located in the northern part of London. It is home to Clan Kelley's Headquarters, which is called The Sandstone Residence. They also control NeoGate, Finsbury New Project and Battlebridge Basin.

The City of London borough is located in the central part of London. The borough is the heart of the United Kingdom's main economy, generating a hefty income from the various businesses and tourists that visit the capital each year. In the wake of the London Bombings, Albion enacted checkpoints, and took over several areas in the main borough (Notably: Barbican Centre, Carousel Plaza and the TOAN Attack Site.

The City of London is also headquarters to businesses such as Quanta Bank (At Swiss Tower) and various other businesses. The borough is a office district and financial center which means there are a lot of offices and financial companies in this area of Watch Dogs: Legion. The City of London is one of the most iconic, with many landmarks dotting its area size. Despite the borough's success in the economy and its huge income, the population of the borough is only 9,700, This is attributed to the vast number of offices in this borough.

The Tower Hamlets borough is located in the eastern part of London. Albion took over the Tower of London and closed it to the public, and then converted the old fortress into their London headquarters. The borough is a mix of high-rise in the west, And low-rise to the east. The eastern side is more poor and crime-ridden compared to the western side which has many offices and a large business hub.

The Southwark borough is located in the southeastern part of London. Southwark is located immediately to the east of Lambeth, and contains the tallest building in the United Kingdom, The Nexus Tower. It is also home to the UK Division of Tidis's headquarters and advanced technologies locations. Southwark consists mostly of low-rises, with high-rises near the northern border of the borough.

The Lambeth borough is located in the southern part of London. It is located immediately to the west of Southwark, and it also contains the European Processing Centre (formely known as the Oval). Lambeth is by far the poorest and the most crime-ridden borough in London. Lambeth contains high-rises in the northern and southern parts of the borough, with low-rises scattered all over the borough.

The Nine Elms borough is located in the southwestern part of London. Nine Elms is the most technologically-advanced of all the boroughs, with The Battersea, Albion Station Nine Elms and the U.S. Embassy all standing out throughout this borough. It is also the smallest borough in Legion's version of London.

Before Albion received a mandate on London, the Metropolitan Police Service was the primary law enforcement in London. However, following the London bombings as seen in Operation Westminster, Albion took over law enforcement duties from the Met. Most police stations are now run by Albion.

Albion makes a prominent appearance in London, with several Albion employees and banners distributed throughout the city, and plenty of Albion cars patrolling around London. Furthermore, there are several Albion checkpoints in every borough.

In London, there are plenty of taxis, buses and trains. Taxis are automated, and can be accessed from the street at any time. Buses on the other hand, usually have a driver and only appear to be servicing a single service - 42, which goes to the city's center.

The London Underground is present in-game as a means of fast-travel. Players can fast-travel to Tube stations spread out across London. There is no physical appearance of the trains itself, nor the station platforms.

Like Chicago and San Francisco, there are plenty of activities to do in London. Such activities include playing Darts, playing football and taking Parcel Fox Deliveries. Doing so will reward ETO, the current currency in London.

Overview of the city

The city at night 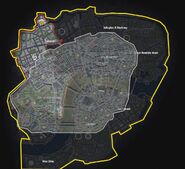 Early map of London in Legion

Map of London in Legion