❝ Look Jacks. When I have to deal with these bad guys... I need you someplace safe. That's what makes me strong.❞
❝ I'm like the Healer.❞
❝ Yeah, you're just like that.❞
❝ Except that's just a game.❞
―Aiden and Jackson Pearce after Role Model

After a failed attempt to hack into the Merlaut Hotel, his uncle Aiden took him and his sister on a trip to Pawnee. However, on the way, a Chicago South Club hitman named Maurice Vega and his partner attempted to kill Aiden by shooting out one of the tires on the car, causing it to crash; although he and his uncle survive the crash, his sister does not. The crash and the death of his sister caused him to develop post traumatic stress disorder (PTSD), making it extremely difficult for him to speak to anyone except his mother. After the death of his sister, he and his mother were heavily guarded by Aiden Pearce, due to Aiden not being able to take the loss of another family member.

Some time later, Jackson's mother is kidnapped by Damien Brenks, though Jackson eludes capture as he was on the train at the time. After his uncle eliminated the Fixers attempting to abduct him, Aiden joined him on the train and asked if he knows where they've taken his mother. Though he remained silent, Jackson showed perceptiveness after pointing Aiden towards Racine Boat Restoration through his drawing on his tablet. Aiden then dropped him off with his therapist Yolanda Mendez while he sought out the whereabouts of his mother.

Later on, however, Jackson decides to investigate one of Racine's buildings himself, but was trapped in the security room as the building was mob-owned and surrounded by Fixers. Jackson witnessed his uncle kill the Fixers on the monitors and was scared of him when Aiden found him, though he decided to trust him. As he drove him back to Yolanda's house, Aiden told him that making sure he's safe is what makes his uncle strong, Jackson comparing himself to a "Healer" from the game "Glitch Wars."

Later on in the game, Jackson and Nicole leave Chicago after discovering that Aiden is the Vigilante. Originally, it was unknown where they went; however in Watch Dogs: Bad Blood, it was revealed that they escaped to St. Louis and that Aiden eventually went with them after the events of the game.

In an audio log from Aiden that may be found at Nicky's house, Aiden says he doesn't know anything about what Jackson and his mother are doing now, except that they've changed their names and don't use the internet. He imagines Jackson becoming the kid he used to be before Lena died, moving on towards a happier life but doesn't dare find out if this is true or try and contact them out of fear of endangering them again. During the side mission Fox Hunt, it is revealed that they are now living in St. Louis.

Jackson wears a black shirt with a blue vest and grey pants. He also has a dark cap similar to Aiden's cap when he wears his default Vigilante outfit, worn backwards and has a blue man as a symbol (Possibly a video game character). 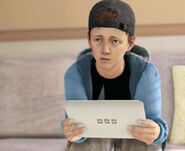 Add a photo to this gallery

Retrieved from "https://watchdogs.fandom.com/wiki/Jackson_Pearce?oldid=66769"
Community content is available under CC-BY-SA unless otherwise noted.