Gap in the Armour

❝ But here's the best part: once this decision is made, no more will be required of you.❞
―Nigel Cass to officials

Inside Albion is the thirteenth story mission in Watch Dogs: Legion, and the second mission in the Albion Chapter "Zero Tolerance".

Hamish Bolaji, a former protégé of Nigel Cass, informs DedSec that he has an inside man within Albion, who says that Cass is planning to have a meeting at the Tower of London. He is planning to reveal a new project that he has planned for London. In order to infiltrate the White Tower in the Tower of London and spy on Cass’s meeting, they recruit an Albion guard to sneak in undetected and, after forging a security pass, the guard spies on Nigel Cass’s presentation.

In the meeting, Cass can be seen unveiling his newest project: Project THEMIS. This creates new autonomous drones, which can kill anyone before they can do harm. However, the Police Commissioner says he believed that Cass was going to speak about the ethical issues of Project THEMIS. The commissioner stands up to call the Defence Minister, and Cass shoots him in the back of the head, killing him.

After the meeting, the operative must leave the Tower of London via the underground catacombs. 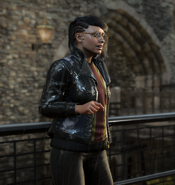 Nigel Cass about to shoot the Police Commissioner.

Escaping through the catacombs.