The Face of the Enemy

❝ You can't just get enough of me, can you? Or are you just incredibly stupid?❞
―Sabine Brandt mocking the operative on top of Blume Tower

Hard Reset is a mission in Watch Dogs: Legion. It is the game's final main mission and the final mission of the DedSec chapter, "London's Protectors".

After DedSec infiltrated Zero Day’s bunker, they discovered that Sabine was the leader of Zero Day and behind the death of Dalton Wolfe. However, the locations of the operatives were compromised, and they are being attacked by Albion. Bagley arranges an emergency briefing for the operatives, with each operative at a different secure location. Suddenly, Zero Day hacks screens around London, and tells onlookers that technology is about to turn against them and will turn their lives into a ‘living hell’. Bagley reveals to the operative what Drool Britannia really is: a patch designed to allow his AI, as well as other Bagleys, to access any vulnerable system connected to CTOS. This will enable them to compromise vital public facilities until they are destroyed, including banks, power plants and hospitals across London and the entire country, resulting in the collapse of society in Britain. Hamish suggests if there is a way to ‘kill every Bagley’, which Bagley agrees to; DedSec needs to break into Broca Tech and destroy Bagley’s servers, whilst taking down the Blume servers simultaneously. One operative is sent to Broca Tech, another to Blume Tower.

As an operative rushes to Blume Tower, cars can be seen driving out of control, bollards lifting up randomly, and explosions can be heard across London. As well as this, lasers beam down from the sky and kill random pedestrians, presumably the result of Zero Day recreating Albion’s Project THEMIS drones. At Blume, they call the elevator to reach the top of the tower. After entering the elevator, the game then switches to another operative, who must reach Broca Tech.

Back at Blume Tower, the operative reaches close to the top of the tower and must reach a transmitter which sends signals to Bagley’s main servers. However, the transmitter is locked of, so Bagley devises a solution to allow access: hijack a drone to force the tower’s fins to change position, creating an error, allowing the operative to request the unlocking of the door for routine maintenance. The operative completes a network bypass to create the error, and they must survive a drone attack while the maintenance request is completed. At the very top of the tower, the operative interacts with terminals to take Bagley offline, but before the last terminal is used, the operative notices Sabine sitting on the very edge of one of the tower’s fins. Two counter-terrorism drones hover next to Sabine, who claim that with the current state of London, DedSec will be unable to fix anything. The drones go in to attack the operative, but before they can shoot, the operative hacks the fin they are standing on. The operative makes it to safety, but Sabine slides down the fin and grabs onto the very edge, shortly before she lets go, to her most certain death.

Back at Broca Tech, the operative uses an elevator to reach Bagley’s server chamber, and immediately starts to destroy the temperature regulators to trigger Bagley’s automatic shutdown procedure. During this, Bagley warns the operative that he will involuntarily attack them, as it is part of his program to protect his servers by any means possible. After the regulators have been destroyed, Bagley begins to act strangely, as if he was not in his modified state. Regardless, he manages to inform the operative that his data containers are above them, and they use a cargo drone to disable three of Bagley’s servers. Once the third server has been disabled, a fourth must be disabled, in order to stop the chaos in London. The operative is hesitant, but Bagley urges them to allow Bagley to fulfil his purpose and serve DedSec. Bagley’s final server is destroyed and speaks gibberish to the operative, soon before Bagley is finally shut down, and the lights at Broca Tech shut off, leaving the operative in darkness.

As the credits roll, footage shows the aftermath of the infrastructure attack, including people recognising DedSec as being responsible for stopping the attack. It is also said that people are getting rid of their optik devices, disabling the SeeSay app. Kaitlin Lau is now the new Deputy Commissioner of the Met police, and council estates declare that they will take measures to prevent a Kelley infestation in the area. People have been reporting abuse of power by Albion guards and corruption in SIRS via a DedSec app. The 404 is also shown to have exposed a money laundering scandal in the British Virgin Islands by the corporate elite. The final scene shows people questioning where DedSec currently is, as they have been particularly quiet after the attack, and left people wondering if DedSec has disappeared once again.

After the credits, a cutscene plays, showing a Blume CTOS Drone flying around London before it crashes into an underground sign. Members of DedSec are later shown to be fixing the drone. Presumably, Bagley was hiding inside the drone, trying to return to DedSec but failed, so DedSec tracked down the drone and rescued Bagley from it, returning him to his terminal at the Safehouse.

Chaos occurs on the streets of London.

Lasers beam down from the sky, killing random civilians.

One of Bagley's coolant pipes.

The tower's fins are lowered.

Sabine sits on the edge of a fin.

Sabine orders her drones to attack the operative.

Sabine clinging onto a fin. 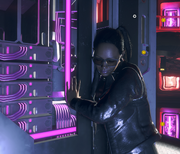 Disabling one of Bagley's servers.

A drone flies over London.