The Federal Bureau of Investigation (FBI) is a law agency and faction in Watch Dogs 2.

The FBI is the United States' primary federal law enforcement agency and also the country’s domestic intelligence and security agency. They have their own division and office in San Francisco and are working with Blume. They are featured within the storyline as an opposing faction against DedSec.

After DedSec starts gaining a lot of followers and doing various operations, the FBI start viewing them as a threat and begin spying on them. Thanks to Miranda Comay’s connections, DedSec discovers this and sends Marcus Holloway to investigate. He downloads data from the agency, however they discover this and start looking for him. Marcus manages to download the data and escape the FBI. Since the Bureau can tap into their communications, Wrench warns Marcus to not use their communications channel for the time being and instead talk in private. Marcus later goes to Dellums Towers, the FBI’s headquarters in Oakland, to place a transceiver on the building’s roof. Despite the agents discovering Marcus, he escapes.

The Bureau later captures Wrench while Marcus places another transceiver. Marcus discovers Wrench’s location and watches as he is lectured by FBI special agent Carlos Fuentes. Blume CTO Dušan Nemec later dismisses the agent and asks Wrench about Marcus and DedSec, though he refuses to talk. Dušan eventually lets him go but prevents Wrench from getting his mask back.

Their end goal in targeting not only DedSec, but all hacker groups, is to maintain control over as many zero days as possible without any competition. Of course, the FBI’s goals are also to enforce the federal laws of the United States of America and ensure peace and security in the country.

The behavior of the FBI is largely similar to the Police’s, only that they can’t summon helicopters, K-9s, Coast Guards and SWAT Teams due to their Heat Level being like a gang/Umeni's though they can arrest the players. However, when calling reinforcements, instead of summoning more agents, the FBI can contact the Police and pit them against the players, making them fight two factions at the same time. This is extremely difficult considering that now K-9s, helicopters, Coast Guards and SWAT teams may arrive depending on how high the player’s Heat Level is. This also means that the player will have to escape a Police Heat Level, which is much harder than a gang/Umeni/FBI Heat Level. Due to this, attacking the agency stealthily and preventing them from calling reinforcements is critical. Also, due to them being a law enforcement agency, agents cannot be framed for an arrest and the Police will ignore them if they attack Marcus and other civilians.

The FBI also drive more aggressively than the police. However, they cannot spawn roadblocks, like the police. Also similar to the police, if the FBI detect the player in a restricted area, they will attempt to arrest them. If the player moves, they will open fire.

The signature vehicles of the FBI are black TBT-7000s, used to bring reinforcements or chase criminals/players. It is also the experimental vehicle that must be stolen when playing some FBI online side missions. 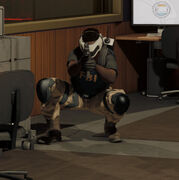 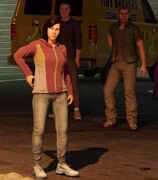 Another group of undercover during the mission.

The FBI seal, as seen in the Dellums Towers during W4TCHED.

When finding player or criminals

When engaging criminals or players