❝ You're not Crispin, are you?❞
―Poppy to Aiden Pearce

Donna "Poppy" Dean is a minor character that appears in Watch Dogs.

She can be seen working in one of Chicago South Club's "Gentlemen's Clubs"and has knowledge of the underground human trafficking organization.

Poppy is an African-American female with blue eye shadow and a shaven head. One of her notable traits is her nose chain, which connects her nose piercing with her ear piercing. She also has a Chicago South Club tattoo on her upper neck, which is used as a tracking device by the Club.

Poppy seems to have courage and heart, as she refuses to leave the auction because she doesn't want to leave her "friends" alone.

In the prologue, Poppy is seen at the Merlaut hotel and passes by Aiden Pearce.

Eleven months later, Poppy had become a sex slave at the Infinite 92 club. At the time, she was laying on a table, waiting for the club's special guest, Nicholas Crispin, when in his place came Aiden. Unaware of his identity and when he refused to harm her, she attacked him with a knife. Aiden managed to restrain her and showed that he had good intentions when he didn't raise the alarm. It was then that Poppy realized that he was an impostor. Aiden promised to help her. But as getting her out of the club would be risky, Aiden had his partner Clara Lille call the club, claiming to be his assistant requesting that Poppy be sent to the auction at the docks.

As the auction of more sex slaves proceeded, Poppy met with Aiden, still masquerading as Crispin. He embraced her before asking about the tattoo at the back of her neck, which she reveals is a tracking device. After Aiden disables it with his phone, she warns him that the Chicago South Club is going to find out the truth soon and urges him to escape. She then declined to escape with him, unwilling to leave her friends. Aiden then leaves, and calls the police, who raid the Auction and rescue Poppy. 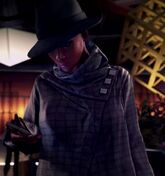 Poppy at the Merlaut Hotel

Aiden and Poppy embrace at the auction.

Poppy at the gentlemen's club.
Add a photo to this gallery

Retrieved from "https://watchdogs.fandom.com/wiki/Donna_%22Poppy%22_Dean?oldid=66713"
Community content is available under CC-BY-SA unless otherwise noted.