Darcy Clarkson is a DLC character to be added to Watch Dogs: Legion in Title Update 5.5. She is the final playable operative added as part of the season pass.

Darcy Clarkson is a member of the British Brotherhood of Assassins, as were her ancestors, the legendary Jacob and Evie Frye. Exiled from London by the Templar Graham Westerly, Darcy has returned to find her brother Lucas and save him from the Templars who control the city.

After synchronizing Bagley at a high point in the Furzton Tower Block, DedSec discovered a message from Lucas Clarkson to his sister Darcy. In it, he mentioned that he had left scattered packets of information about Templar operations in London. Through similar messages left between the siblings, DedSec learned about the ongoing conflict between the Assassin Brotherhood and the Templar Order, the latter of which had members infiltrating the major factions in the city such as Albion, Clan Kelley, SIRS, and more.

Darcy eventually realized she needed help from DedSec, and left a trail for them to find by storing information in her Eagle Drone for an Operative to download. After pulling a phone call between Darcy and Graham made recently, DedSec decided to track the Assassin down themselves. An Operative was able to establish communication with Darcy and she filled them in on the situation: her brother had been captured by the Templars and she couldn't rescue him alone.

Darcy agreed to meet with DedSec at Albion Station Kennington where her brother was being held. She requested that DedSec hack into the building's security to find her brother, then leave it to her to infiltrate and retrieve him. After hacking into the CTOS Hub there, DedSec gained access to a camera in an interview room where they witnessed a conversation between Lucas and Graham. Lucas confessed to giving up the location of the Tomb of the Assassins at Buckingham Palace, after which he succumbed to his injuries and died in the chair he was bound to.

Not letting her anger blind her, Darcy resolved to bring the fight to the Templars breaking into the Tomb at Buckingham Palace, and asked for DedSec's help in neutralizing the security team guarding the Tomb's entrance. An Operative took out the whole team and hacked the surveillance system within, buying time for Darcy to enter the Tomb and retrieve the artifacts inside ahead of the Templars. Darcy found her way in to the cave system the Tomb was constructed in. She came to the entryway, a large stone wall which could only be moved by aligning Isu symbols with their appropriate statues. She gained entry to the Tomb of the Assassins soon after.

Another door deeper in blocked the way to the secrets that the Tomb held, forcing Darcy to figure out a second puzzle. In the center of the Tomb, there was a monument to Jacob Frye, Evie Frye, and Edward Kenway. Each Assassin had their own symbol needing to be correctly aligned, however the correct ones were hidden throughout the larger area of the Tomb. With the help of her Eagle Drone, Darcy explored the adjacent chambers and eventually entered the correct combination. Upon doing so, the large, precursor door activated a navigational challenge for Darcy to complete in order to open the last door. After completing the challenge, the Assassin gained entry to the inner chamber. There she found her reward, the vaunted artifacts of the Tomb of the Assassins: an Assassin outfit of unknown origin with a Hidden Blade and Hidden Gun ready for use.

Just as she donned her new robes, however, high-ranking Templar and SIRS liaison Graham Westerly breached the tomb with a team to kill Darcy and claim the artifacts recovered by her. With her newly gained tools, Darcy assassinated all of the Templar guards between her and her target before assassinating Graham Westerly in the Tomb. Darcy trades a last few words with Graham in a memory corridor, where he mocked the inability of her Brotherhood to put up "a good fight" in protecting London and advised her to find "a new one" before dying. Darcy then left the Tomb. Darcy later reconnected with DedSec, telling them of her deeds in the Tomb. She decided to follow in her brother's footsteps and fight the Templar threat in London, but was reluctant to do so without allies like what her ancestors had. DedSec offered their aide to the Assassin, who takes it into consideration. Ultimately, Darcy agreed to ally with DedSec to take back the city from the remaining Templar infiltrators. 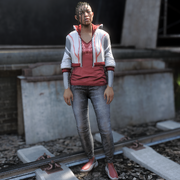 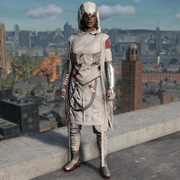