The Landrock Motors Coach is a vehicle in Watch Dogs 2.

The Coach takes design influence from the X1TET Volvo B12B, having a relatively short wheelbase, twin-axle design, and high capacity. The front right features a sliding door which opens on a hinge towards the rear. The vehicle has tinted side and rear windows. Coach buses can be seen plain or with Nudle livery on them. The Nudle Coach buses are operated by Nudle, and are used to cater to their employees (most notably seen in the mission Limp Nudle.)

It is heavy but powerful, and slightly more nimble than the city bus. The vehicle's heavy weight and diesel engine gives it an advantage over other vehicles on the road, meaning it can plough through traffic with little effort, even more so than the regular city bus. Despite this, the large windows make the player vulnerable to firepower from police. The vehicle's long body has to line up exactly to make a full turn without causing it swerve or ram into other vehicles.

The Coach bus, along with the City Bus and Bogen Bus, is a key component in the obtaining of the "Something to Ride" trophy/achievement. To earn this reward, simply hijack a bus. 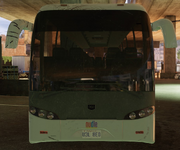 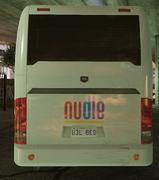 In-game meme of the Nudle Coach

Parking along with several Coaches in the arena

Dashboard view: Overlooking Tidis HQ from the flyover with Galilei seen in the distance