View source
watch 02:52
Roblox: DeepWoken - The Loop
Do you like this video?
Play Sound

Bottom of the Eighth (voice)
Open Your World

❝ I'm about to open your world.❞
―Clara upon meeting Aiden

Clara Lille is a major character and the deuteragonist of Watch Dogs. She works as a member of DedSec and an informant of Aiden Pearce. Her hacker alias is BadBoy17.

Clara was born in 1985 and grew up in the Quebec province of Canada (possibly in the Laurentides region).

As a child, she developed an interest in urban legends. Her father often took her camping in Mont-Tremblant, and the pair would go looking for treasure. What she didn't realize was that he was stealing valuables from cabin's. She once discovered an ancient Roman coin which he allowed her to keep.

As an adult, Clara worked as a tattoo artist. She grew to become a skilled hacker and later became a member of hacker activist group DedSec, under the alias BadBoy 17. She also became a fan of legendary hacker Raymond Kenney.

She was a hacker to hire and was paid by contractors to identify targets (the harder it gets, the more money she gets). After Aiden Pearce and Damien Brenks, two hackers, failed their job in the Merlaut Hotel, she was hired by Dermot "Lucky" Quinn. She identified the two, which caused both to become Chicago South Club targets. During the attack, Lena Pearce was killed instead of her uncle Aiden. After Clara terminated her association with the Club, she was hired by Aiden in person to find Lena's killers. At this point, she never met him in person and used her alias and voice changing software. She saw Aiden first after the funeral, and seeing him saddened by Lena's death, she swore that she would heal Aiden from Lena's death by finding the killers, though she was trying to hide her involvement in the hit.

Clara first appears in the first mission, Bottom of the Eighth, as BadBoy17. At this point in the game, Aiden/the player does not know about BadBoy's identity. During the mission, she unlocks the electrical grid so Aiden can use a blackout and escape the stadium.

After Big Brother, she leads Aiden into hacking the Loop CTOS control center to trace a call Aiden intercepted. She later calls him and meets him in person, during Open Your World. She finally tracks the unknown caller, who turns out to be Damien.

She then continues to help him throughout the course of the game after meeting Aiden in person to give him the DedSec System Hacks sent to his smartphone. Clara helps Aiden to find the Bunker and hack inside Rossi-Fremont. Because she can't decrypt Iraq's data, she helps Aiden to locate Raymond Kenney, a "legend" that could help decrypt the data. Aiden later raids Rossi-Fremont and steals all the data.

The bunker later gets hacked by Defalt. During the attack, he reveals that she was hired to track down Aiden and Damien after the Merlaut job in order to place a hit on them. Aiden demanded to know who hired her, to which Clara denies any knowledge. This leads to Aiden shoving Clara away, even as she tries to apologize.

As time goes by, the Chicago South Club begins to treat her as an enemy, because she was fully aware of the Club's activities. While Aiden in on his way to the Merlaut Hotel to kill Quinn, she calls him to tell him that she will fix things. Joseph DeMarco has, however, warned Quinn of Clara as she was a liability. Quinn, fearing Clara because she "has developed conscience", tasked one of his associates (named A. Bryan) to have her killed.

After getting Nicole and Jackson out of town, and after killing Quinn, Aiden learns from Damien that Clara had tried to trade herself in for Nicole. Aiden realizes that Quinn intends to have her eliminated, and heads to the cemetery, where Clara is visiting Lena's grave to place flowers there. Just then, hitmen from the Chicago South Club locate her at the graveyard. Alerted by T-Bone, Aiden races to her, but is too late to save her from being shot to death. After dispatching the hitmen, Aiden gives Clara a moment of silence, takes her flowers to put them on Lena's grave, before taking her phone. He listens to Clara's last voicemail to him. In it, she talks about first seeing Aiden and Jackson playing chess in the park, after Lena's funeral; and explains her reasons for helping him "heal" from Lena's death. The message ends with Clara saying that if they cannot talk when "this is all over", she can "at least disappear. That's something I'm good at."

❝ Clara is seductive. She’s dangerous. She’s the trapdoor spider you never saw living right under you. She can weave her way through any system and she can expose every secret you hide.❞
―Description from the official website

Clara is a Caucasian female with a slender build. She has long brown hair with white highlights, cut into a mohawk like style that stops about shoulder length. She wears silver flesh tunnels in both ears and has three facial piercings: both cheeks and a labret (lower lip). She also wears black eyeliner with a touch of eyeshadow. Clara also appears to have tattoos on her upper chest, neck and arms. She has a Triple Valknut Tattoo on her chest.

Clara wears a low-cut, black DedSec top and above, she wears a black, short-sleeve leather jacket. The cleavage area slightly reveals a black bra. She wears a long necklace and a number of wrist bangles and accessories. This also includes a ring on her index and middle finger of her right hand and another ring on her ring finger of her left hand. Clara's dark-themed appearance is continued by her use of black nail polish/varnish, with a white star and curve.

Clara wears a large spider-web belt, which is only half visible, and a light brown belt that is matched to a neatly fitting pair of grey jeans. She also wears black knee-length boots with six squared-studded straps and a low wedge heel.

According to the official website, Clara is a seductive and dangerous individual. A highly skilled computer hacker, she can bypass most systems and gain access to the most private of information.

During A Blank Spot There-Ish, she tells Aiden that she grew up poor, and her father was a treasure hunter and/or petty thief. She accompanied him treasure hunting as a little girl, and he allowed her to keep a small coin that he told her was the key to the Roman empire.

As a member of DedSec, Clara believes that information should be free.

Clara can easily read people through their actions. This is seen when Aiden apologized for being rough on her. She explained that she knew what he was doing to try and intimidate her with the stare, contact and strong stance he displayed to try and find "cracks" in her.

It is also apparent that Clara was haunted by the fact she placed the hit on Aiden, ordered by "Lucky" Quinn, that led to Lena's death. It is the guilt she felt that she decided to work with Aiden to "help [him] heal" as well as herself from the guilt of causing a child's death.

In the mission Remember, Nicole asks Aiden if he knows who keeps leaving the dark flowers on Lena's grave. Though neither of them know, they are unbothered by this, as "that girl had a lot of friends". However, there is reason to believe it was Clara, leaving the flowers out of guilt and repentance. This is more or less confirmed at the end of the game: in the cutscene where Clara dies, she is carrying the same kind of flowers as she approaches Lena's grave.

At first, Clara and Aiden do not trust each other and visible tension can be seen between the two in their early interactions. Though she cannot be trusted, Clara forms an alliance with Aiden, sharing common ground through being hackers.

Later on, the two grow to truly care about each other, with Aiden saying she is the closest he has to having a good friend. It can be implied by her dialogue and her behavior that she might have fallen in love with him.

As per her words "I'm a fan." She idolized Kenney and relished the opportunity to be able to work alongside him during the short period of time they had together.

Clara was hired by Quinn to track down Aiden and Damien. While Clara was the one who gave the Chicago South Club the names, it was Quinn who truly ordered the hit. It was due to this job that Clara felt compelled to help Aiden, not only to heal him, but to hopefully make up for what she unwittingly had done.

By hacking Quinn's emails while in his office Aiden discovers that not only did Clara not accept the payment for the hit on him but has also declined all job offers from Quinn's associates since then too. Quinn later asked one of his associates to have her killed, because she "has developed conscience".

Clara, with her smartphone showing the Dedsec logo

A screenshot, giving almost a full view of Clara 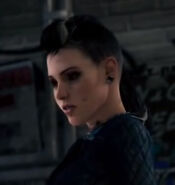 3D base model of Clara 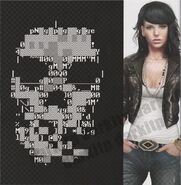 Other concept art of Clara