watch 03:19
Wiki Targeted (Games)
Do you like this video?
Play Sound

The MatarHorn Trucks City Bus is a bus in Watch Dogs 2.

The City Bus is based on the vast majority of buses that are operated by the real-life San Francisco Municipal Railway, using the same gray and red paint scheme and gray and turquiose for Oakland. The vehicle comes with a small bicycle rack on the front and LED signs that read the location where the bus is found. For example, if the bus is in San Francisco or in Oakland, the LED sign will read "SAN FRANCISCO" or "OAKLAND" respectively. The bus also bears two LCD screens on both sides, as well as a third one on the rear showing "SF" or "OAK".

City buses mainly spawn in denser areas such as downtown San Francisco and Oakland, but spawn less frequently in suburban areas and highways. They are never seen parked in a "bus depot" under a highway that leads to the Bay Bridge much like the Coach.

The performance of the vehicle is very similar to that of the Coach Bus, having low speed and acceleration, but average handling. Its brute force means it can pass through small cars easily, but the windows do not provide enough protection against gunfire.

The city bus, along with the Coach Bus and Bogen Bus, is a key component in the obtaining of the "Something to Ride" trophy/achievement. To earn this reward, simply hijack a bus. 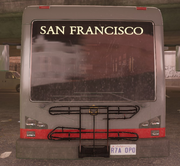 Front view of an MUNI bus. 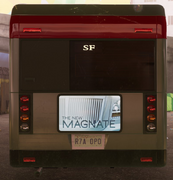 Rear view of an MUNI bus.

Right side view of an MUNI bus. 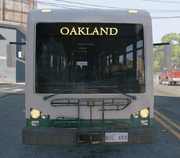 Front of an Oakland bus. 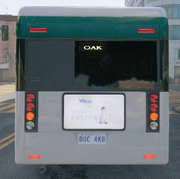 Rear view of an Oakland bus.

San Francisco Bus (right) & Oakland Bus (left) side by side

Retrieved from "https://watchdogs.fandom.com/wiki/City_Bus?oldid=81971"
Community content is available under CC-BY-SA unless otherwise noted.