Not to be confused with the Chopper, the standard version of the Chopper Cruiser, or the Cruiser, a police variant of the Cavale.

The Hardy Motorbikes Chopper Cruiser is a motorcycle in Watch Dogs 2.

The Chopper Cruiser is a touring-style chopper which is a variant of the Chopper, having a front fairing, side panniers on the back and a third one mounted over the rear fender.

The Chopper Cruiser is slightly more durable than any other in its class. However, it is more intended for cruising around San Francisco rather than competing with other vehicles, doing stunts, or even being used as a getaway vehicle. The bike's performance is shared with that of its base model. 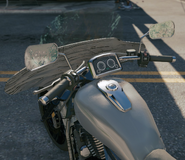