The Chicago South Club (often shortened as The Club) is a powerful Irish-American crime syndicate in Chicago, led by Dermot "Lucky" Quinn (after he dies, his son Niall takes over.) It is featured in Watch Dogs.

In the late 1920s, Chicago was divided between the mostly Italian South Side Gang and the mostly Irish North Side Gang. When the latter was decimated by the 1929 St. Valentine's Day Massacre, a handful of Irish bosses allied with its leader, George "Bugs" Moran, met at a gang bar to discuss the situation and ended up signing an agreement to pool their resources into a new outfit to regain control of the city. This new collaboration was named the Chicago South Club after the bar where it was founded.

In its early years, the Club faced stiff competition from the entrenched Chicago Outfit headed by Al Capone, who had ordered the massacre that killed off the Club's predecessor. Fearful of the Club's growing power, Capone organized a hit on two dozen of its members while they met in a park, killing them all except for a thug named Dermot "Lucky" Quinn, who survived with only a grazed ear.

In time, however, the Club avoided the fate of its rivals by strengthening its ties with Chicago's Irish community and expanding beyond smuggling and bootlegging to more lucrative ventures like political corruption, financial crime, and black-market arms. It eventually absorbed the remains of the Chicago Outfit, becoming the most powerful criminal force in Chicago for several generations.

By 2013, it had fallen under the now elderly Quinn's control, who made the Club even more relevant by pushing it into both human trafficking and cybercrime activities, modern crimes that would ensure the Club's survival. Quinn also made a deal with the Black Viceroys leader Iraq, which made the association the most powerful crime syndicate in Chicago. Thanks to corrupt ties with Mayor Rushmore, the Chicago Police, and many city personalities, the Club rules all over the town.

Just like the Viceroys, the Club's main activities are embezzlement, extortion, bribery, kidnapping, and cybercrime. The Club also leads a human trafficking ring, which consists of kidnapping young women (mostly immigrants) and selling them as sex slaves every year during a yearly auction at Brandon Docks, where special guests are chosen and invited by Quinn himself. Quinn is also close to the Blume Corporation, which introduced the ctOS in Chicago. Thanks to his ties with the company, Quinn uses the ctOS to his benefit and has, for example, used the Bellwether code to rig the mayoral election and have his "puppet" Rushmore re-elected.

The Club plays a major role in the storyline. Aiden Pearce often confronts the Club during the storyline. The Club makes their first appearance in the first act, where they task Fixer Angelo Tucci to have Viceroy soldier Raul Lionzo delivered for interrogation to find the Vigilante's identity. The Club also appears in the second act, where Aiden kills one of their clients, Nicholas Crispin, to infiltrate the 2013 auction. The Club makes a final appearance in the fourth act. Aiden subdues them at the Merlaut Hotel and kills their leader, Quinn.

In the wake of Quinn's death, his son Niall attempts to fill his father's shoes as the new leader of the Club.

Club Gunmen have poor weaponry, and wear urban clothing such as leather jackets with hoodies, turtlenecks and slim-fit jeans.

Club Marksmen use long-range sniper rifles that allow them to hit targets at the longest ranges possible. Marksmen wear heavy overcoats and flat caps and are often hidden on elevated structures.

Club Elites wear green shirts with military gear and body armor. They use military weaponry and tactics. They can take more bullets than Veterans or Gunmen.

Main Article: Enforcer Club Enforcers have heavy armor and use heavy weaponry such as U100s and ATSG-12s. With their heavy armor, Enforcers can stand incredible numbers of bullets before dying.

Club vehicles can be identified by their black paintjob and tinted-green lights. Additionally, the Club's two main vehicles, the Koln 500S and the Talos, have been de-badged and have additional modifications such as custom "Celtic knot" rims.

Quinn's other bodyguard (Appears only in Grandma's Bulldog and No Turning Back). 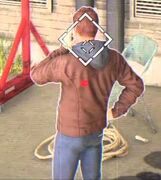 Another Enforcer.
Add a photo to this gallery

Retrieved from "https://watchdogs.fandom.com/wiki/Chicago_South_Club?oldid=70682"
Community content is available under CC-BY-SA unless otherwise noted.