The Chicago Police Department (abbreviated Chicago PD or CPD) is the primary law enforcement in Chicago, appearing in Watch Dogs. With the recent introduction of the Crime Prediction System, police can use the CTOS to identify and locate criminals in a matter of seconds, based on as little as a 911 call. 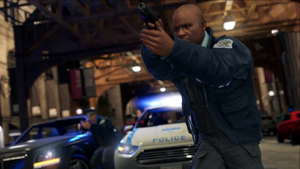 Most Chicago police personnel wear navy-style uniforms consisting of an external bulletproof vest over a light blue shirt and tie, dark cargo pants, black shoes, and a dark blue jacket with the Chicago Police patch on the left sleeve and the flag of Chicago on the right sleeve. All patrolmen also wear a unique star-shaped badge on the upper left of their vest and some of them will also wear a checkered police cap.

All CPD patrol cars are white with blue stripes on the sides, and bear an emblem on the hood. "POLICE SERVICES" is written on both sides of every car. The cars are also equipped with spotlights, Motorola, blue LED lights and emergency sirens.

If Aiden Pearce pulls out a conspicuous firearm in public, fires an unsuppressed weapon, kills someone, runs over a civilian, steals a car (without the Disable Alarm hack), etc., civilians can report him to police. After a successful phone call, a CTOS Scan will search for Aiden's whereabouts. If Aiden fails to evade the CTOS scan, the police will respond immediately and arrive within a few seconds of scan completion and attempt to apprehend Aiden (or open fire if past Heat Level one or after Act III).

If a criminal fires their weapon at the player, the civilians will report the player as the suspect instead. This is possibly due to a glitch, or a developer oversight. Thus, police will target Aiden instead. However, if a criminal shoots directly at the police, they will respond immediately by firing back. The police usually do not shoot at enemies attacking Aiden unless he is hidden from their sight.

For example, police officers will prioritize shooting at Aiden over gangsters or mission enemies. If, however, the attackers are directly harming officers, they will retaliate with gunfire, provided Aiden is not in sight of them. Officers will become hostile if the player hits their squad car, but if a civilian's car bumps into an occupied patrol car, they will not respond. If a mission enemy opens fire at officers unprovoked, the player will immediately receive a heat level even though they did nothing.

The Police A.I. has a priority system. If a criminal has killed several police officers, Aiden's heat level may be increased, and, if a helicopter is summoned, the marksman will retaliate against the criminal if they open fire at the Helicopter. If Aiden is hiding in a dumpster, the police will ignore Aiden completely (even if the top is open and he is exposed, possibly due to a glitch or developer oversight) and focus on hunting the criminals down and shooting them. Another aspect that can be noticed very easily is if the criminals are kept in a short distance with the Police, and Aiden is kept a long distance from between them, the police may still open fire at Aiden, ignoring the criminals in the process. This can be interrupted by either hiding in an object, or alternatively if the criminals begin shooting at an officer, which will temporarily attract all police attention to them. Sometimes, if the Police spot a Criminal that is visibly armed, they will not invest any effort into apprehending them, and will completely ignore them unless they are being attacked by them for some reason.

Police A.I. "cheats" mostly on Search Mode. In the E3 version of the game, if Aiden evaded the police and they entered Search Mode they would just keep speeding around the map, wondering where he is on the realism level. In the final version, however, this has been adjusted into a more "cheaty" method. When the police enter Search Mode they will always patrol around Aiden's hiding spot, the A.I. pretending it doesn't know where he is, but in reality, knowing his exact whereabouts. There are even many instances where officers will get out of their cruisers and walk directly to the player's hiding spot, thus spotting Aiden relatively easily.

Another strange addition is that when Aiden is hiding in an alleyway and there is a nearby police cruiser, shooting in the air will immediately put the police in Search Mode. Even though they do not know who the shooter is, they will always put the blame on Aiden. If Aiden causes a traffic accident involving a patrol car, they will not react to it and casually drive off as if nothing happened. They will, however, respond against Aiden if they are caught in a steam pipe explosion. They will also respond and chase Aiden if he speeds, collides with a car or runs a red light.

The Police Helicopter usually gives chase during or after heat level 3, depending on the ACT. However, the Police Helicopter is also granted an unfair advantage. It is able to outrun even the fastest of cars, and the marksman's A.I. rarely misses its shots. To overcome this, make constant drifts with a vehicle to lower the sniper's precision. Additionally, the player can kill the sharpshooter, (raising heat and lowering reputation) disable the helicopter using the Disable Helicopter Hacking skill to temporarily disable it, shoot it with the Destroyer to make it flee immediately, or land a hit on it with a grenade launcher. Criminals may also open fire at the helicopter and in response, the marksman will retaliate against the criminals.

As the name suggests, they are based on the SWAT (Special Weapon And Tactics) teams found in various real-life cities. In Watch Dogs, they serve the city of Chicago.

They are much more powerful than regular police officers, carrying better weapons than their blue counterparts and boasting better accuracy. Thanks to their body armor, they are also able to take more damage than standard officers. Elites do wear helmets, but functionally, they are useless, as they are still killed by a single headshot from any weapon. SWAT vehicles are also stronger and more deadly than the regular Police patrol cars.

Depending on the player's story progress as Aiden, SWAT teams will begin placing roadblocks consisting of SWAT-variant SUVs during the fourth or fifth heat level, replacing the regular police SUV roadblocks. Like the CPD, they will attempt to run the player off the road. Their roadblocks do not appear in Bad Blood, however.

Each SWAT SUV contains one Elite and one Enforcer. Sometimes there will be two or three Elites. The driver will always be an Enforcer. When on-foot, the Elites will take cover, but the Enforcer will walk slowly (and menacingly) towards the player.

SWAT teams equip different sets of weapons. Their Elites on the ground usually carry MP5 SMGs, although some of them can be seen wielding M1014 semi-auto shotguns. At the same time, their Enforcers make use of SG-90 pump-action shotguns. Other Elite Marksmen will wield a SR-25.

Unlike the police, SWAT units do not make any appearances in the campaign or patrol the streets, and will only appear during a Police Pursuit and the Excessive Force Criminal Convoy.

Their appearances during pursuits are treated differently when playing as Aiden compared to T-Bone. Depending on the player's progress in the storyline, SWAT teams will be more frequently encountered during later stages of the storyline. During Act I, SWAT teams will only be dispatched at the highest heat level, but not as frequently as regular police officers. However, as soon as the player completes Act I, they will begin making occasional appearances during the fourth heat level. Once the player completes the first two chapters of the story, SWAT teams will become more prevalent. They will occasionally appear at the third heat level, and during the highest heat level, regular patrol vehicles will stop being dispatched and are entirely replaced by SWAT SUVs, making the pursuit much more intense, although police officers will still spawn on-foot and attempt to stop the player.

In Bad Blood, SWAT teams are instead treated similarly to when the player hasn't completed Act I of Aiden's storyline, towards the entire game.

In Online Hacking or Online Tailing, if the invader opens fire, nobody will report him as a shooter, and thus, no patrol cars will be dispatched. If, however, the player who is being invaded shoots, the civilians will report him and the police will respond to the victim's actions, completely and unfairly ignoring the invader's actions. This also gives the invader an advantage, especially if the player who is being invaded already has a wanted level and is being chased by police.

Moving Ahead of Pursuit

A police version of the Sonarus LX.

A police version of the Cavale.

Side view of a Police Vessel.

A police version of the Polar.

A SWAT version of the Polar.

Police Officers are looking for Aiden.

A police car turned on its spotlight, looking for Aiden.

Chicago Police are in pursuit of Aiden.

Police officers are trying to box in Aiden's car.

Patrol car in use (Diamond sprite)

The Chicago Police Vessel in Watch Dogs 2, taken from an in-game movie set.