Chicago is the largest city in Illinois and the third largest in the United States. It is the main setting of Watch Dogs, and is home to the Central Operating System (CTOS) which began citywide use in 2011.

Chicago is the county seat of Cook County, Illinois, and is located on the shores of Lake Michigan in the northeastern part of the state. It can be assumed that the history of Watch Dogs rendition of Chicago is largely the same; the city was incorporated in 1837 and grew rapidly in the 1800s because of its westward location, favorable geography and mass immigration in the 19th century that shaped the United States and other countries in the Americas. After the Great Chicago Fire of 1871, the city made a concentrated effort to rebuild, and by 1900, Chicago was one of the largest cities in the world.

Chicago continued to grow into the 20th century, and the majority of the city has experienced urbanization and has been largely developed to accommodate business and inhabitants. Beginning in 2011, the city's infrastructure has been controlled by a computer system known as CTOS. The operating system software controls transport, the Crime Prediction System technology, telecommunications, blockers, drawbridges, and much more. Aiden Pearce is able to hack the system to control all of these functions.

The city's geography is roughly based on that of its real-life counterpart; Mad Mile and The Loop are meant to emulate Chicago's real-life downtown neighborhoods. Brandon Docks and The Wards are meant to emulate South Side neighborhoods such as Bridgeport and Englewood among others. Parker Square roughly coincides with the West Side, and Pawnee is a rural area outside Chicago. An area roughly corresponding to the city's North Side is shown on a satellite view of the game's map, but is not depicted in actual gameplay.

The Brandon Docks is a largely industrial district of the city, and is based on various neighborhoods of the Lower West Side. Brandon Docks is home to various industries and ghettos, and is predominantly inhabited by African-American and Eastern European (such as Czech and Polish) citizens.

The Loop is adjacent southward from the Mad Mile, and is another one of Chicago's downtown districts, housing the city's various businesses, high-rise residential buildings and tourist attractions. The Loop provides the player some of the best sites in the entire game, and the most hot-spots to check out.

The Mad Mile is the northernmost district of the city, meant to mimic the real-life Magnificent Mile, commonly known as the "Mag Mile". It is home to numerous high-rise skyscrapers, upper-class residential areas, bustling streets, various businesses and restaurants, and its visited by both tourists and locals alike.

The Parker Square district is the most westward district of the city, based on various West Side and its neighborhoods such as Humboldt Park, South Lawndale, and West Town. Parker Square is a more working and middle-class residential area of the city, with ethnic working class neighborhoods including Czech, German, Irish, Italian, Mexican, Puerto Rican, Polish, and Ukrainian communities, while also featuring a number of upper-middle class suburbs of predominantly white residents, showing the stratification of the city's communities.

The Wards district is the most southward district of the city, and is based on South Side Chicago and its community areas and neighborhoods such as Douglas and Englewood. The Wards is heavily run-down, made up of ghettos, abandoned areas, low-end businesses and run-down industrial areas, and is home to a large portion of Chicago's African-American community.

Because Watch Dogs takes place around early to mid autumn, Chicago is quite cold and windy (giving it the nickname The Windy City). Because of this, days tend to be rather short, nightfall arrives early and the leaves have changed color. Overcast weather, rain, and even the occasional thunderstorm are to be expected, and pedestrians are dressed for this weather. This gives the game a dark atmosphere, in contrast to its sequel. However, snowfall is not depicted.

The city of Chicago is crossed by the Chicago River, separating the downtown in two parts, connected by several bridges that Aiden is able to raise. Lake Michigan is also featured and is stepped by highway bridges. The lake can be crossed by boats and is connected to the city by a harbor.

Chicago has a long history of crime. During the early 20th century, Chicago's crime scene was largely controlled by Italian mafia families, as well as other ethnic gangs, with the Prohibition era making Chicago one of the central cities in bootlegging and other organized crime. Additionally, it was home to (or visited by) some of America's most notorious gangsters, such as Al Capone and John Dillinger. Chicago's homicide rates peaked during the 1980s and 1990s, and while reduction of crime has coincided with the decline of American crime rates since 1993, Chicago is still infamous for high crime rates, gaining the nickname of Chiraq.

In Watch Dogs, Chicago is home to two large factions, the Chicago South Club lead by Dermot "Lucky" Quinn, and the Black Viceroys, lead by Delford "Iraq" Wade. The Pawnee Militia are another faction who are limited to the rural suburb of Pawnee, and are a right-wing militia who oppose the American government. There also exists a large contingent of Fixers, who share no particular unity, and DedSec, who are at odds with all of these factions.

During the game's story, both the South Club and Black Viceroys are able to manipulate CTOS and have made shady dealings with Mayor Donovan Rushmore, Blume, the CPD, and other personalities in the town, allowing them to "run the streets" so to speak. The Pawnee Militia, despite their isolationist views, are also involved in colluding with these organizations.

Areas which are particularly plagued with crime are the Brandon Docks and The Wards. The player should be careful around restricted areas, which can arouse unwanted attention.

The Chicago Police Department, or the CPD, is the main law enforcement in the city and Pawnee. However, their interaction to the public is scarce as they rarely patrol in the streets, relying more on CTOS scans rather than 911 calls. If someone happens to commit a crime, a CTOS scan will be initiated and authorities will respond accordingly if a CTOS scan is successful and the suspect has been located.

Chicago, being a large city, has a large road network composed by avenues and highways. These highways cross the entire urban area with bridges and tunnels. Aiden can change the way of the circulation with his smartphone. The city also features water zones accessible by boat.

Chicago can also be crossed or visited by taking the L-Train, run by the Chicago Transit Authority, that Aiden can control. The Chicago public transport network is also composed by taxis, run by Rapid Cab, such as the taxi cab and the Water Taxi. Bus stops also exist around the city and people can even be seen waiting at them for the bus, but strangely, there are no buses in Watch Dogs. However, at certain bus stops a bus map is visible, revealing Chicago does have an extensive bus system. This suggests buses were cut late in development, or the maps are a developer's oversight.

Map of Chicago in WATCH_DOGS. 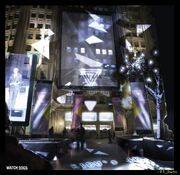