Watch Dogs Wiki
Register
Don't have an account?
Sign In
Advertisement
in: Articles in Need of Cleanup, Factions, Gangs
English

❝ What the fuck? I was expecting a bunch of twitchy kids with cheap guns. These guys feel almost military.❞
―Jordi Chin

The Black Viceroys is a street gang featured in Watch Dogs, who, alongside the Fixers, serve as an enemy faction in the game.

The Viceroys were originally a small-time group of underworld players until army veteran "Iraq" turned them into a powerful criminal organization second only to the Chicago South Club.

As part of their evolution, the Viceroys seized control of the dilapidated Rossi-Fremont public housing complex, which they converted into a hideout they christened the "Castle". It included multiple apartments where gang members and their families lived, a lounge and arcade for senior Viceroys, several packing areas for black-market goods, and a server room/office for Iraq, who was rumored to keep the computer key etched on his dog tags. To keep their base secure, the Viceroys surrounded it with armed guards at all times and fitted every space they could find with re-purposed CTOS surveillance equipment.

While the Viceroys make most of their revenue from traditional drug manufacturing and marketing operations, they have expanded into new areas, including embezzlement, extortion, bribery, kidnapping, and even cybercrime. Furthermore, under Iraq, they have entered into an arrangement with the Club to provide protection for the latter's newly forged human trafficking network, which has drawn the Viceroys even more closely into the world of international crime.

To keep people convinced the Viceroys were just street criminals, Iraq separated the gang into two groups. The first group was made up of Gangbangers, lowly thugs whom Iraq allowed to tag and bag under the supervision of senior members. The other group, which Iraq referred to as his "family", was made up solely of members loyal only to him. They were trained in military skills and tactical warfare, and wore distinctive orange armor identifying their level of ability. Those with only chest and skull armor were rated as Soldiers, while those with full armor were classified as Commandos.

The Black Viceroys were ultimately subdued by Aiden Pearce when he infiltrated the Castle and killed most of the "family", including Iraq and his bodyguard Coleman. With Iraq's death, the Viceroys lost their influence to the point they were no longer an issue by the time of Watch Dogs: Bad Blood and were swept aside by the Militia as the major player in the underworld.

The weakest type of Viceroy, Gunmen can be easily killed by a shotgun shell to the chest or a headshot. Gunmen wield pistols, SMGs or shotguns, and will occasionally throw Frag Grenades (much like the other types of Viceroys excluding Enforcers) towards Aiden's cover spot.

Veterans are soldiers who are more experienced than Gunmen, but not as strong as Marksmen. A couple of SMG/Assault Rifle rounds or a shotgun blast can easily take them out. Their heads are also vulnerable to headshots.

Gunmen who use sniper rifles. They are usually perched high up among the ruins of locations like Rossi-Fremont and can be difficult to identify without being spotted due to their locations. A sniper rifle is the best option to help identify them, but the best method is to just look for their distinctive red sights. Marksmen can be taken out easily with a sniper shot to the head, but this can be difficult due to the unsteadiness of sniper rifles. Whichever method you use, Marksmen should be eliminated as soon as possible since they can kill Aiden in two to three shots. Marksmen, when spotted, will have a red circular shaped target over their heads to identify them.

These "family" members wear tactical armor and wield high-power automatic weapons. When identified, they will have a red star on their bodies. Elites are tough to take out due to their armor, but they have open-faced helmets, making their heads a weak point.

As with any other Enforcers in the game, these are the strongest, yet rarest members of the Black Viceroys. They have incredibly tough full-body armor and wield powerful shotguns or machine guns, which can kill Aiden in a matter of seconds if he doesn't take good cover. Enforcers are nearly unstoppable if the player uses rifles or shotguns, but they are incredibly weak to explosions. The best way to do this is to use the Lure to get them near a Junction Box or other explosive device, which will kill them in a matter of seconds. If you have IEDs or Frag Grenades, you can toss at least two of them at an Enforcer to kill him. Finally, a quick way to kill an Enforcer before he becomes a pest is to shoot two rounds from any grenade launcher (G106 or GL-94). Enforcers, when spotted, will be marked with a red shield to help the player identify them.

Viceroys use Vessels and Polars as their main vehicles. They can be identified by their unique two-tone black-and-white livery. Their vehicles have additional modifications such as custom rims and gang insignias. Other vehicles that they have used include: 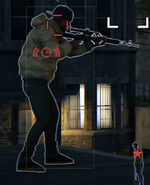 A Black Viceroys Vespid HMI. Note that the hood and trunk have been painted black.