The Kuruhawa Motorsports Batta is a vehicle in Watch Dogs 2.

The Batta is a small all-terrain vehicle, taking the form of a quadbike. The vehicle has off-road tires and capacity only for the rider.

The Batta is a good ATV overall. It has oversensitive steering, meaning it can flip over at high speeds. It also has a heavy weight and because of this, its top speed is lower than expected. 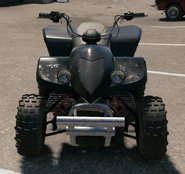 Front view of the Batta. 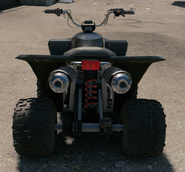 View of the handlebars.