The Auntie Shu Boys formed in the 1990s after the collapse of the previous Triad, taking members from the various Chinatown gangs and Tongs. They are unique, a mix of organized crime and street gang, with Chinese and Vietnamese members alike. They do everything from stealing cars to selling drugs to committing sophisticated white-collar crimes. For human trafficking, the Auntie Shu Boys act as brothel enforcers for Chinese Triads that ship women to them. Currently, they seem to be led, and presumably founded, by a powerful, intimidating woman only known as Auntie Shu.

The ASB mainly profit from human trafficking and illegal stock transactions, sometimes using the first to smuggle experts to do the second, as seen during the mission Shanghaied. They also counterfeit money and deal in drugs, namely marijuana.

The modified Baumsteiger used by the Auntie Shu Boys.

Detail of the gang's logo on the car.

Another logo, present on the Baumsteiger's roof. 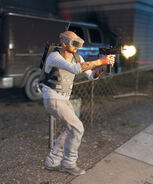 Another.
Add a photo to this gallery

Retrieved from "https://watchdogs.fandom.com/wiki/Auntie_Shu_Boys?oldid=71008"
Community content is available under CC-BY-SA unless otherwise noted.