❝ The AK-47 is known for its durability and simplicity. This Russian workhorse is great for medium-range encounters and offers solid penetration.❞
―In-game Description

The AK-47 is an assault rifle that appears in Watch Dogs and Watch Dogs 2.

The model found in-game contains a mix of features from different AK-style rifles, including an AK-74 style stock, fore-grip, muzzle break, and gas block, and either an AKM or AK-74 receiver, and the magazine is shaped for 7.62x39 ammunition. The wooden pistol grip is based on the AK-47. The weapon model bears little resemblance to the original AK-47. However, both the AK47 and the AK74 belongs on the same family of weapons.

The gun offers good rate of fire, but reduced damage in comparison with other assault rifles such as the Biometric Rifle. 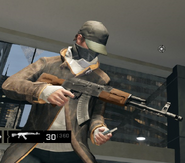 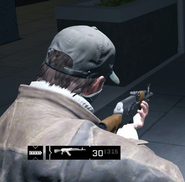 Aiden Pearce aiming his AK-47 service rifle.
Add a photo to this gallery

Retrieved from "https://watchdogs.fandom.com/wiki/AK-47?oldid=66618"
Community content is available under CC-BY-SA unless otherwise noted.